Submissions are always executed in the context of a programming problem. The Sphere Engine service is responsible for submission correctness verification as a solution to a given problem.

Submissions are always executed in the context of a programming problem. The Sphere Engine service is responsible for the correctness of verification of submission (a solution to a given problem).

The diagram below illustrates the above scheme of how the system works (click to enlarge): 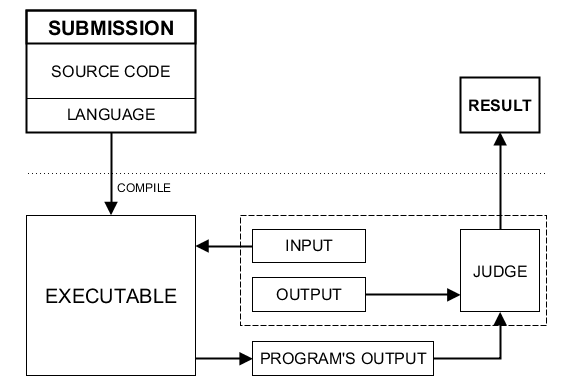 The description in the previous section has been simplified. We assumed that the programming problem contains only one test set. In reality, it is possible to establish many so-called test cases.

The single test case consists of:

The user's submission is executed independently for each test case. Consecutive executions are performed in a sequential manner.

The result of executing a submission on a single test case is the verdict, which determines whether the submission solves the test case correctly. Additionally, in the case of problems involving optimization, a score is also determined.

After obtaining the verdicts (possibly with the associated scores), it is possible to determine the final verdict for all test cases (potentially with the final score).

The component responsible for determining the final verdict is the so-called master judge. It is a program that is part of a programming problem that determines the final results based on the results obtained during individual test case executions.

The diagram below faithfully reflects the processing of the submission in the system (click to enlarge):

Usually, a submission is neither completely correct nor completely incorrect. The test case mechanism quantifies the degree of solution correctness. A good practice is to identify various aspects of a solution's correctness and to test them independently in separate test cases.

Examples of solution features that can be verified:

The mechanism of test cases was not designed to repeat a large number of analogous tests. Numerous analogous tests can be optimally implemented as part of a single test case. For more information, see the Good test cases design section in the Appendix chapter.